Well we started the day with pretty low expectations about what we were going to be able to do with the weather forecast the way it was. But we were pleasantly surprised by the day; no rain, slightly chilly and enough wind to be a bit of nuisance but not enough to keep us house bound.
Our first stop was to Purakaunui Falls and with all the rain of yesterday and over night there was plenty of water flowing. The boys thought it was pretty awesome and with the walk being only 10 mins either way and no major ups or downs there wasn’t too much complaining.

After Purakaunui Falls we drove to Purakaunui Bay to see what was there. It was another cool little bay with a mixture of nice sandy beaches and rocky shores.

Jacks Bay was the next stop on the adventure. We had lunch there and then went for a walk along the very nice beach. Our timing worked out pretty well because as we started the walk north along the beach a Sea Lion came out of the surf. It was fairly big and certainly not something to mess with.

After watching the Sea Lion for a fair while we jumped back in the truck and headed to Nugget Point to check out the old lighthouse. The views from the lighthouse are awesome and we would highly recommend making the effort to visit.

The Nuggets at Nugget Point.

We called into Owaka on the way to back to our accommodation in Papatowai and grabbed ice-creams and coffees and let the boys have a good play on the playground. All in all a very successful day.

Here are some other great blogs that we follow 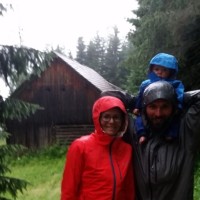 Give It A Burl

Life, food, coupons, and good times all rolled into one.

Nature is our playground, where the best adventures take place

Family Adventures in the Canadian Rockies